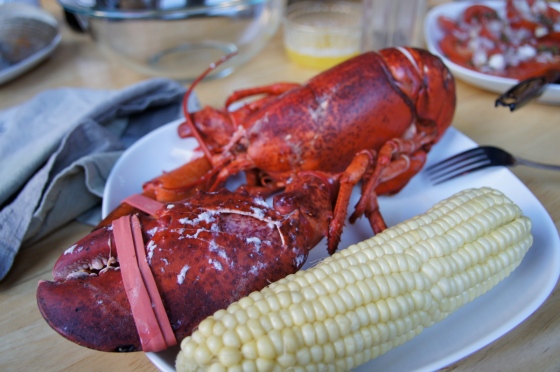 There are certain combinations of food that go together perfectly, and such is the case with lobster bakes (also known as clambakes) in New England.  Lobster, clams, corn, potatoes are traditionally steamed over several hours in a fire pit dug in the beach.  For the home cook, preparation can be significantly simplified.  You need a big pot with a tight-fitting lid, filled with an inch or so of water, and a steamer tray or wire rack to pile on the lobsters and clams.  For one person, figure about a 1 1/4 to 1 1/2 pound lobster (live lobsters currently about $9/lb at Ranch 99 in California.)  With the accompaniments, that should be more than enough.  You can also add in some sausage like chorizo, andouille or linguica, but that is not necessary, given the glorious flavor of the lobster. 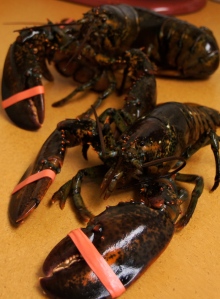 Some people might be squeamish about putting a live lobster into the steamer to cook, and that is an individual decision.  From a taste perspective, steaming is much preferable to boiling, where the lobster comes out a bit watery and the flavor is diluted.  For a brilliant take on lobster cooking ethics and many other lobster-related issues, read David Foster Wallace’s incredible essay, “Consider the Lobster.”

Jasper White is a Boston-based chef famous for seafood served at his Summer Shack restaurants.  His cookbook suggests the following cooking times for male lobsters.  1 1/4 lb 12 minutes.  1 1/2 lb 14 minutes.  1 3/4 lb 16 minutes.  Female lobsters in the summer months that carry roe that must be steamed for an additional two minutes at the same weight.  Since it might be hard to tell the difference between male and female lobsters, I just go with the longer cooking times.

A couple of suggestions for eating.  Lobster pliers or a big cleaver are essential tools to crack open the shells.  A bib or napkin will protect your clothes from the inevitable flying bits of lobster from the lobster cracking process.  A big bowl in the middle of the table can be used to collect all of the spent shells.  Don’t forget the meat in the small walking legs – they are like little lobster popsicles.  The soft green digestive gland (tomalley) and eggs (roe) inside the body cavity can be eaten too, although their flavor is not for everyone.

Drawn butter is the traditional dipping sauce for lobster.  It is made by melting butter over low heat, swirling constantly to try to prevent the flavorful milk solids from separating, which is easier said than done.  Add a little bit of salt and that’s it.

Small red or white new potatoes will usually take longer to cook than the lobster, so they can be boiled separately, for about 20-30 minutes until done.  The corn can be cooked in the microwave or boiled with the potatoes.  A tomato salad with shallots, lemon, olive oil, and capers and some steamed broccoli are great, simple side dishes.  The lobster is the star!

If you found useful information here, please consider a $1 donation to support more kitchen adventures! Thanks!